March 16, 2012
During the week, we modified the 17th green bank to solve a problem some felt was unfair when a ball would trickle to the edge of the green only to gain pace down the steep slope into the non irrigated sandy area, this problem was also effecting putts when the pin was in the vicinity as well.
Pics of missing peak , side view of bank and view from back before work commenced 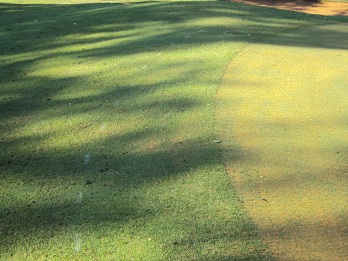 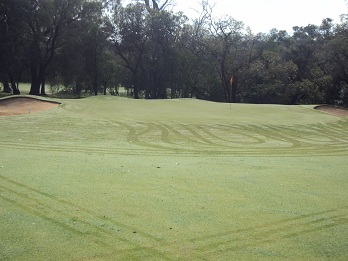 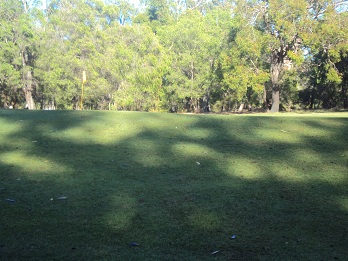 We cut the turf, added sand / soil, shaped the area and re-laid the turf. we took the opportunity to construct the missing "peak" the high humps around the green that for some reason was not constructed on that portion. We allowed for drainage creating a few swails.
Rolling Turf and filling area with soil 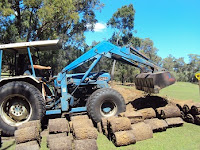 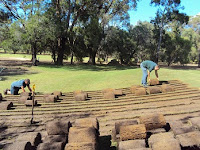 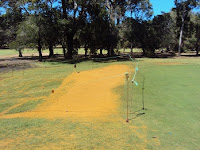 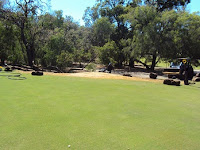 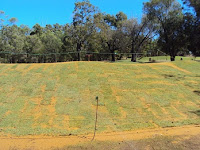 Same views as first 3 after work
Seeding the green side of the new work will be done next week after the sand has had time to settle and we consolidate the area a little more. The area is G.U.R  and nearest point of relief no closer to the hole is in place.
It is expected the turfed area will be in play in 3 to 4 weeks while the seeded area on the green side will take some time before it is in play.
Why did we seed this area instead of turf ? I hear you ask.......We don't want the couch grass encroaching into the greens any more than it has, we seeded the 1m area with bent grass and will serve as a buffer zone between the couch and the green perimeter.
17th Bank