August 24, 2012
Finally the bobcat was here on Wednesday for a few hours to excavate the green and bunker, 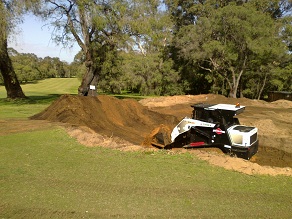 With some deft use of the tractor and bunker rake we managed to shape the green area and surrounds. 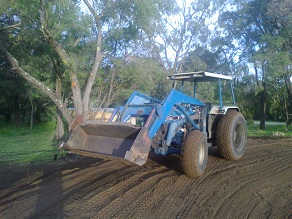 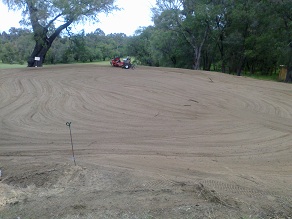 The bunker will be shaped next week along with a final tidy of the area before we allow the area to settle and spray out remaining grasses.

Once satisfied we will then begin the process of loading the root zone sand from our pit, another shape, some consolidation and the green will be ready for seed.

The surrounds will be seeded with Rye grass initially and then stolonised with couch after our fairway renovations, reason being we were given a very tight budget to work with, our brief, to construct a decent size chipping green and bunker to similar quality as in play greens  for under $1000, many would have said (actually I can't write what they would have said), but we will get it done within the budget allocated.

It isn't going to be without problems, the first being the bunker constructed on the high side of the green means it will be a shallow bunker, the location and proximity to the club, 18th green and practice fairway limited location of the bunker for safety reasons. At the end of the day the members will have a very good quality practice chipping area, one well over due, with room for improvement as the club grows.
practice chipping area