July 07, 2012
I was asked during the week why the back putter is so much slower than all the other greens.

The back putter is a very small green 180m2, it is also surrounded by a limestone wall on 2 sides and a 4ft drop on the other sides with only one access point.
We only have a triplex greens mower to mow greens, and with no room to turn when we did mow the back putter with the triplex even at 2nd daily intervals, huge wear areas would develop at either end of the green simply from the excess wear the small restricted area could not handle.
Effectively, due to the size and design of the green only 100m2 could be holed for putting. 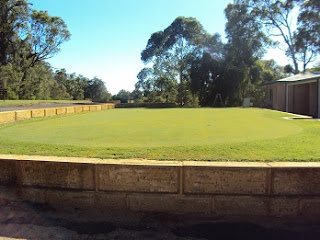 As a measure to overcome the wear caused by this we commenced mowing the back putter with a Walk Behind cylinder mower, unfortunately the walk behind is a domestic cylinder mower and not a golf green mower. The domestic mower can only be adjusted to 6mm at its lowest, with no speed control. As you know we cut greens at 2.5mm to 3mm, golf green mowers are precision equipment, are able to cut that low, have speed control and a greater number of blades to remove clippings.
We were faced with a choice, mow the green with the triplex mower, have it at the same pace but with bare areas and struggling turf which would mean total closure of the green for extended periods or cut with the walk behind, the green be slower but no bare areas, healthy turf and open all the time. Obviously we chose the later.

Long term plans are in place to eventually replace the green, we hope to obtain a golf green walk behind mower later this year, not just for the back putter but for other means as well. In the meantime if you want an indication of the true green speed, use the main putter.

On to the course news for the week and a similar story workwise from last week, on top of our normal set up and some routine maintenance we have all but finished the detail of the roughs on the back 9. Hopefully by the end of next week all the front 9 will be detailed and we can finally put the storm clean up to bed and return to the winter works we had planned starting with the construction of the practice chipping green.

Till next week happy hacking...just not the turf ok!