July 31, 2011
Was a pretty wild end to the week over the past few days with over 60mm of rain and wind gusts up 90km/hr recorded on course.  4 trees needed removing after the wind brought them down and plenty of bunker wash outs to repair as well.

Wanted to put a pic of the bunker wash outs but was to busy to take one !

It made life a little difficult cleaning up and repairing washouts with also trying to complete the 10th green pipe works whilst Anthony is at TAFE and another staff off sick leaving only 2 of us for the majority of the week.

By Friday afternoon all work was completed, tho with the winds persisting small debris across the course will not make it the tidiest it has been over the weekend.

Now for the 10th green pipes.
Following in the tradition of locating pipes, scratching the head and asking why would ya ? aka the 12th green 16th tee masterpieces the 10th green didn't let us down.
We found the right side 50mm fwy main was capped and not directly connected to the green supply pipes, it instead connected to a 32mm pipe which was further reduced to 25mm pipe and elbowed through the bunker, of course this pipe was blocked meaning no water was being supplied at all to the right side green pipes. 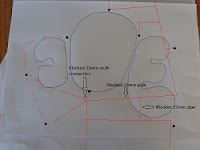 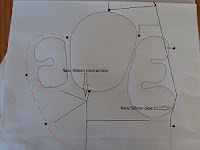 We removed the blocked 32mm and 25mm pipes completely and added a new 50mm connection to the right side fwy main.
We also replaced a 25mm connection which had 5 direction pipes attached, the small size meant this connection was also blocked, the connection was replaced with 40mm size connection and spread out a little as you can see.

All other pipes in the location were thoroughly cleaned with varying amounts of iron removed, we also opened up the original line to the 11th Fairway from this area which was blocked as well and we hope that this as well as the unblocking of the 13th will increase the water flow to the 11th Fwy.   So now will be on to the 11th green and 12th tee, tho with cleaning up the course after the weekend storms will be the first priority.
irrigation pipes weather