October 24, 2010
At recent green committee meetings I have harped on about the lack of winter rainfall and the potential consequences we could experience as a result. In the main, I have focused on the added pressure, with a 4 week earlier start to irrigation than average, on our water allocation particularly towards the back end of the season. Combined with the earlier start we are also contending with the need to increase usage above that normally used as the dry weather continues through Spring. We are limiting usage where we can, carefully monitoring consumption and will balance the levels over the course of the irrigation season.

The other consequence of this drier than average weather pattern, is the development of Hydrophobic soil conditions or water repellent soils, in basic terms a situation where a soil will not wet regardless of the amount of water applied. Generally we experience this problem at some point through the summer season, on all turf areas to varying degrees, West Australian sands are among the most susceptible in the country to developing Hydrophobic conditions, particularly in areas of poor sprinkler coverage, or open exposed areas.
In small areas such as greens and tees applications of wetting agents in advance of any surface symptoms takes place as a normal maintenance procedure, the renovation period where coring is undertaken, humus added also helps with the prevention of this. On large scale areas such as fairways, due to costs, we treat as required, this usually is in the form of one application roughly timed around the beginning to mid summer and then spot spraying patches if they develop. De thatching the fairways, tho 2nd yearly due to costs also plays a role in addressing this problem.
This season we are already experiencing the water repellent conditions in the fairways, some 2 months earlier than average, below are two pictures illustrating the effect of Hydrophobic soil.
Both pictures were taken after 15mm of irrigation was applied, only 2m separated the location of the plugs. 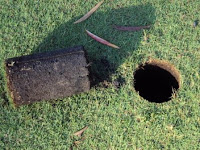 This plug,left, has moisture to the depth of the plug, the surrounding turf is green and healthy. 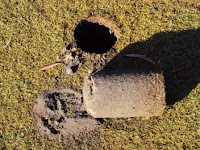 The plug is dusty dry, no moisture at all, the surrounding turf is yellow, showing signs of stress, weak and thin as a result.

Soil water repellency is caused through the production of complex organic acids during the decomposition of organic matter. These acids are wax like substances that form a coating over soil particles which repel water. Some diseases and insect pests also excrete a wax like substance with the same result.
Water has strong cohesive forces, (water molecules are strongly attracted to themselves, a droplet) and adhesive forces, ( attraction of water to other surfaces which causes the water to spread out) By using soil surfactants, (non ionic wetting agents), we accomplish 2 outcomes, we reduce the surface tension of the water (the cohesive force) and increase the adhesive force with the hydrophilic compounds (water loving) in the wetting agent coating the soil particles.
On large scale turf areas, this can be costly, hence why we are very stringent with its use large scale. Over the next week we will be applying wetting agents to Fairways to improve the hydrophobic conditions experienced at present.