When you know it takes 27 hours to manually irrigate the back 9 from Tee to Green just once, and you need to do this at least twice in a week plus extra for Tees and Greens,
When you know the weather forecast is for temperatures above 30 degrees for most of the week, you have a public holiday and three competition days to work around, the last thing you want to see on the first manual shift of the week is this .... 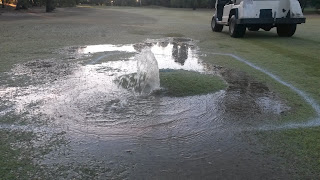 Fortunately we were able to plug the leak temporarily keeping the irrigation running for the complete first cycle then made the permanent repair without too much disruption or delay to irrigation before the competition players came through.
Just another week in the irrigation season.

Between other must do maintenance works during the week we recommenced work on the 6th tee, all going well we hope to have all the amendments added and levels complete this time next week.  During the peak season with our very small staff, extra mowing demands and the manual irrigation of the back 9 we do not have a great deal of time to allocate to projects such as this which takes just that little but longer to complete. Your patience and understanding is appreciated.

The nursery area is coming along 9 days after seeding with a green tinge appearing on the Rye collar as is the Bent grass surface. The Rye grass is being used as a buffer between the nursery and surrounding infertile area. It generally germinates quicker than Bent grass only taking about 7 days compared to the dry seed germination of Bent at 14 days, it is because of its relatively quick germination that Rye is sometimes used as a "nurse" grass protecting turf types of longer germinating or establishment times. 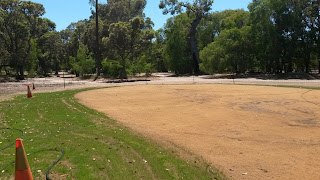 Constant moisture monitoring specially in the heat is ongoing with manual irrigation every 2nd hour Public Holidays and Weekend times are the biggest issue with the manual system and another reason I was a little concerned with shutting down the irrigation to repair the above leak.  Moisture levels are critical at this stage of development for the young seedlings, if allowed to dry out; it will be curtains for the seeded area.