April 20, 2012
Each Winter the staff undertake a few major projects on the course, over the past few years that has included the installation of the front 9 auto retic, tree trimming works and last year the cleaning, re-piping of the back 9 manual system till the auto retic is fully installed. Sometimes the winter period is not conductive to the type of work such as turf establishment however with only 4 staff, manual water system and the extra mowing through the growing season time does not allow these extra works to be carried out, so tho not ideal for some projects, it is the only time we can commit to such works without affecting course quality.
This winter period ( I should point out I am classing the winter period from when we turn off the irrigation pumps) some works planned are -

Practice Chipping Green and Bunker
To improve member practice facilities we will be constructing a 270m2 practice green, chipping area and practice bunker on the site of the existing practice bunker to the left of the 18th green. The existing garden beds, and bunker will be removed.
I have delegated Anthony to be in charge of the project as part of his final year TAFE apprenticeship training, and he will be undertaking the planning, work and supervision of the project under my guidance.

16th Mound
A new mound will be constructed greenside, where the old Pepi tree was and basically extending from the existing mound constructed for surface water diversion.
Still under review is the prospect of removing the short right hand side bunker and replacing with a mound or bunkering further from the green. This Bunker causes a corralling effect of players between the green and bunker heading to the 17th path, which causes excessive wear, thin turf growth and bare batches to develop despite the best efforts of staff to preserve the area. Also the bunker is riddled with tree roots from the nearby trees.

Front 9 Auto Retic.
Towards the end of winter when we start preparing the irrigation system for summer we will be removing all sprinkler internals, servicing them, cleaning and re installing. With 3 seasons down, the need to service or at least clean them is required to ensure optimum operation. With some 230 odd sprinklers, it will be a major undertaking in itself. 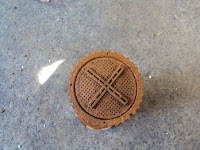 The above picture shows iron staining on the sprinkler filter located underneath and in the main casing, this was expected as it is part of the system which is not air tight unlike the pressurised pipes so cleaning prior to irrigation start up is required.

Other works
Other works planned include Bunker maintenance with work ongoing on the" lips", tree trimming, maintenance to paths, and the usual course grooming and maintenance.

On a slightly different note, I presented the course committe with the summer green speed trial results last Monday and I will endeavor to cover it in the blog as best as small space allows.


Oh and finally, The course is set in fantastic condition for the weekend so get out there and have a great day. 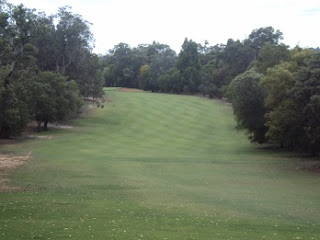