November 22, 2011
Its been a while, sorry about that, with the break in and replacing the computer system along with what has been a busy few weeks made it difficult to update the Blog.
The greens came back well from renovations and are now being cut at 3mm tho we did slow down the time frame due to the concerns from the renovations, (see earlier post). They are still a little off pace as we get some vigorous growth growing for recovery and for summer health, but will settle down from here on, quicken up as we start controlling the growth by spoon feeding rather than granular feeding of the greens.
There remains a few weak patches on the greens from the sand being left on at reno's for such a long period of time but are slowly knitting up and will be under close observation for disease or stress related problems.
You may have noticed some bunker works being undertaken around the course, we are lowering the entry lips of the bunkers built up over the years from excess sand and also levelling bases, which I am sure many of you will appreciate, tho there will be some disruption as we remove turf, remove the excess sand and then relay the turf. Some Bunkers will have the total lip removed while others will only have small section removed.
We have taken delivery of a new Toro Sandpro Bunker Rake over the past week and as such expect a huge improvement with bunker conditioning with the extra features this machine offers over our very old Smithco one which was near Death. Hydraulic steerable blade, better prong penetration and the mid mount weeder Tyne will help with better bunker maintenance. 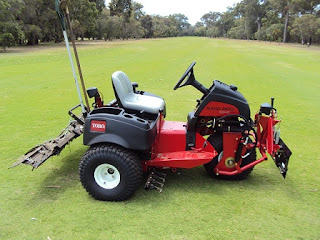